Every year, 24 students from Audencia, a Nantes business school, organise the Triathlon Audencia – La Baule, led by Hervé Delaunay. This energetic team works throughout the year to prepare an exceptional event, bringing together more than 7,000 athletes and 70,000 spectators. During the weekend, nearly 500 students volunteer their time to help the event run smoothly.

Conviviality, enthusiasm, challenge and team spirit are our key words to make your weekend a memorable one.

The Triathlon Audencia – La Baule has become a must-attend event for triple effort enthusiasts, as well as the elite of the French and international Triathlon by hosting the Grand Prix Final since 2018.

The Triathlon Audencia – La Baule is to date the largest student-organised sporting event in Europe. Moreover, it is thanks to its dynamism that the association has received several awards, such as that of the 3rd largest student association in France in 2015.

In 2022, the 35th edition of the Triathlon Audencia – La Baule will take place. The event was born in 1985, taking place for two years in Nantes. In 1988, under the direction of Luc Chatellier, the Audencia Triathlon was exported to La Baule, on the most beautiful bay in Europe, where it has been held for 35 years now.

Director of the organising committee

Before being the Director of the Triathlon Audencia – La Baule, Hervé Delaunay was a physical education and sports teacher and has always been a great fan of the triple effort. He discovered triathlon in 1986, successively practising triathlon and duathlon (more than 200 events), D1 duathlete, technical advisor for the discipline, coach and trainer, creator of triathlon training courses and sports director of the elite group of Les Sables Vendée Triathlon (2006 – 2014). 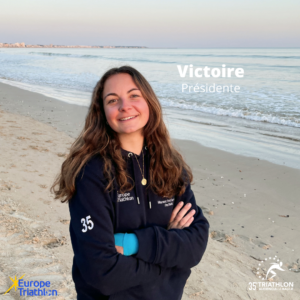 The President’s main role is to enable all the other divisions to function at their best. Before the weekend of the Triathlon Audencia – La Baule, it is therefore necessary to ensure that everyone has the information they need to move forward and check that the work is done on time and in coherence with the overall project.

The president acts as a link between the association and the outside world. He has a privileged relationship with Hervé Delaunay, the director of the Triathlon and has regular discussions with the School’s administration and the partners.

Our role is to respond to participants’ requests, manage their registrations and welcome them at the week-end. In relation with Ipitos, our partner in charge of the Triathlon timing, we manage the allocation of bibs and the verification of supporting documents to ensure the safety of all during our event. 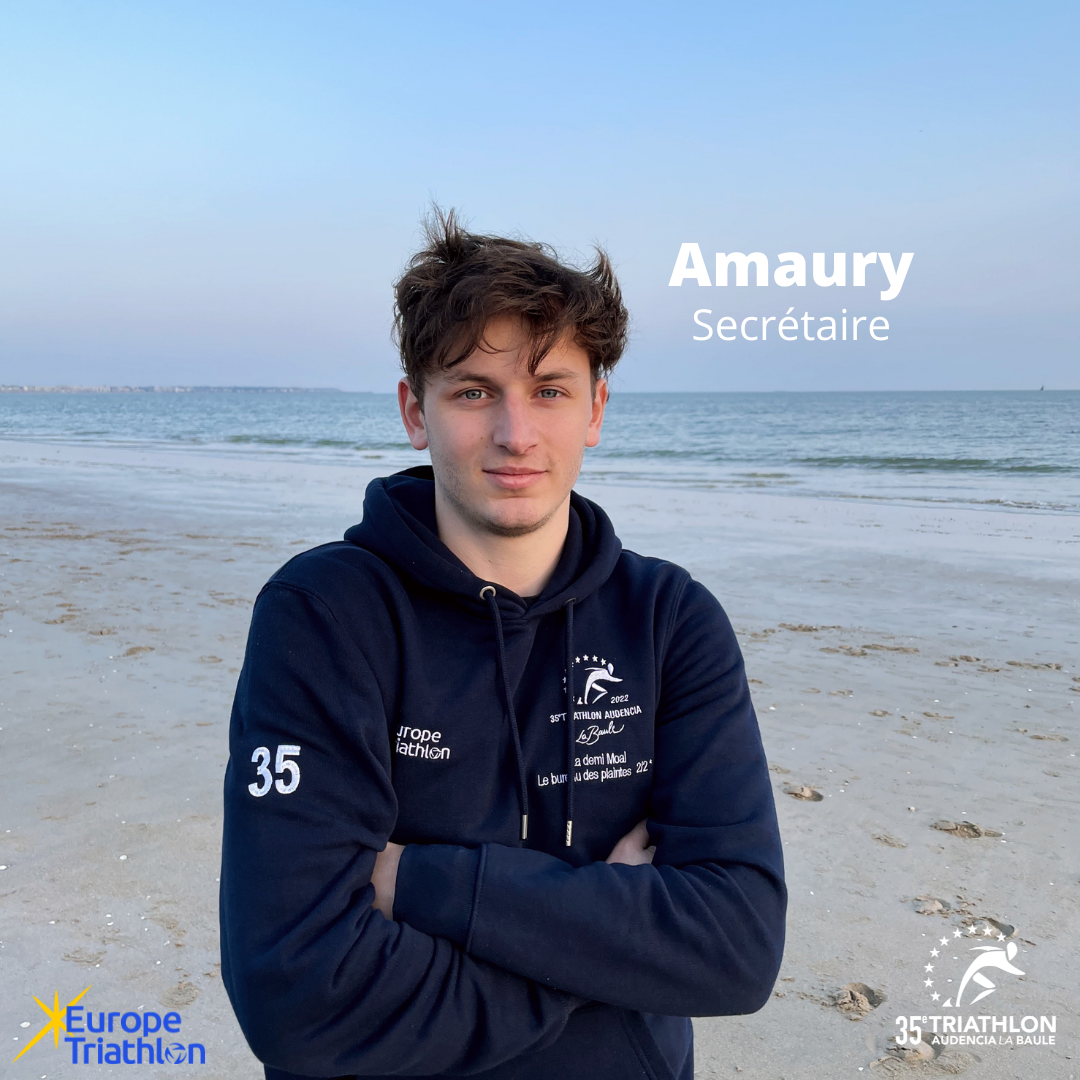 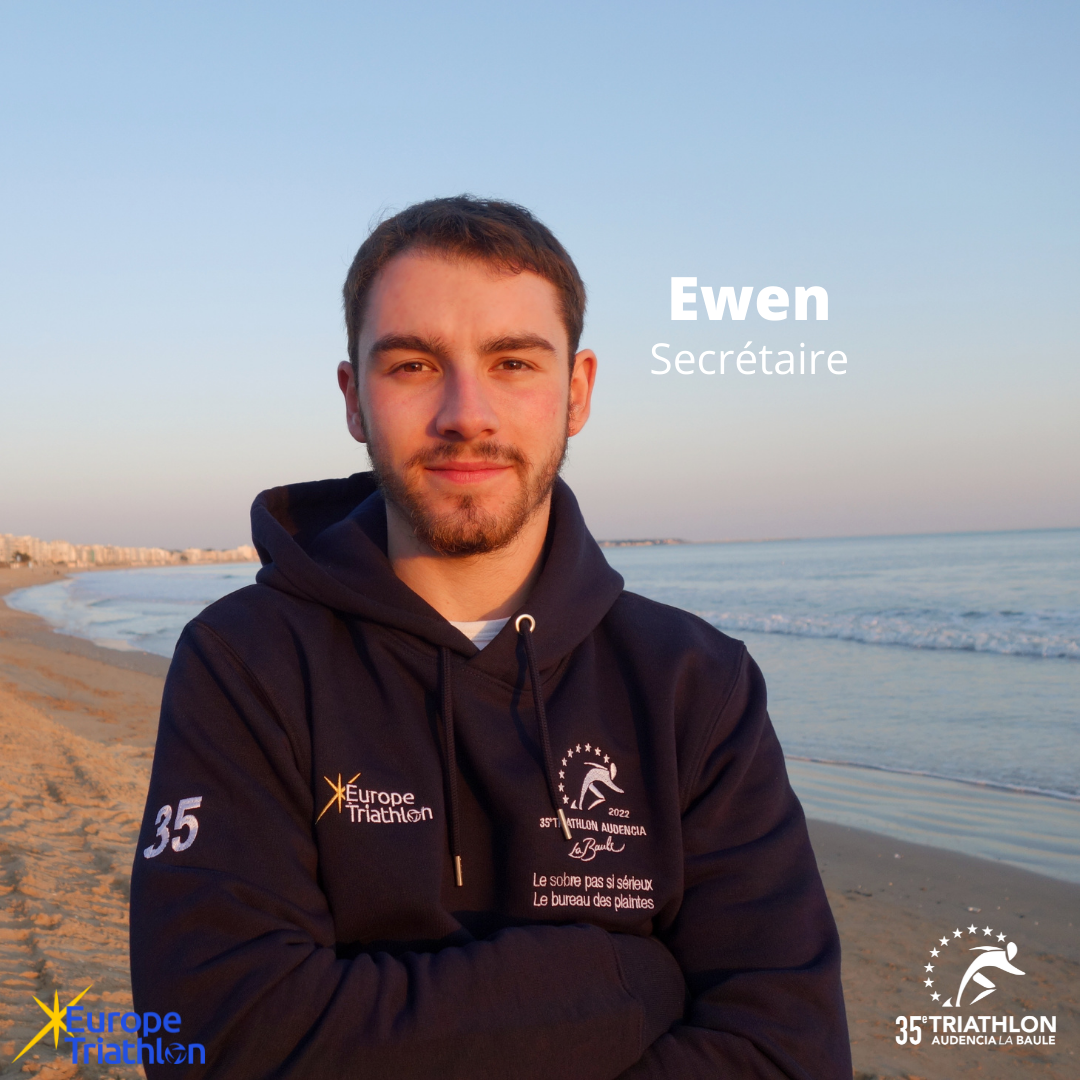 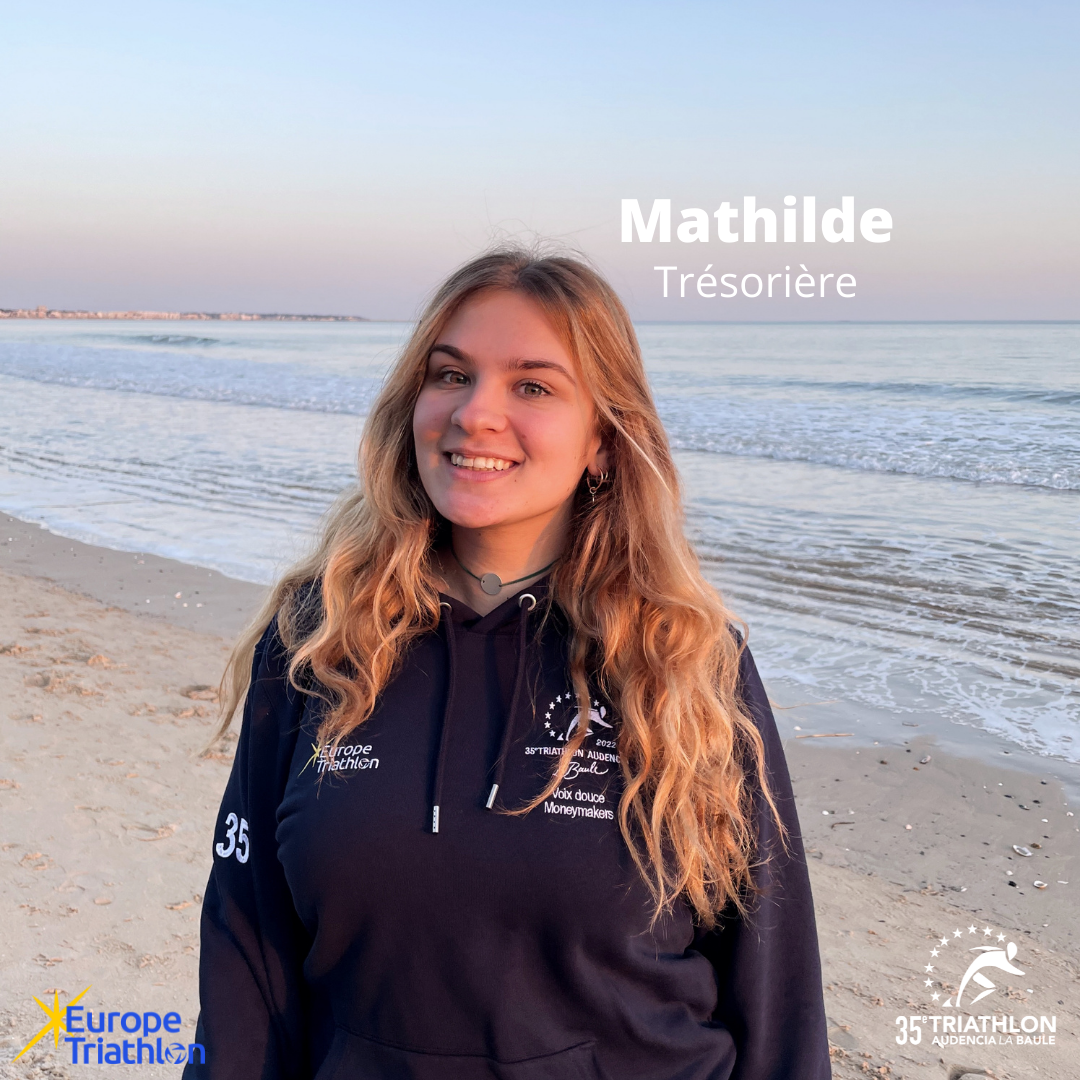 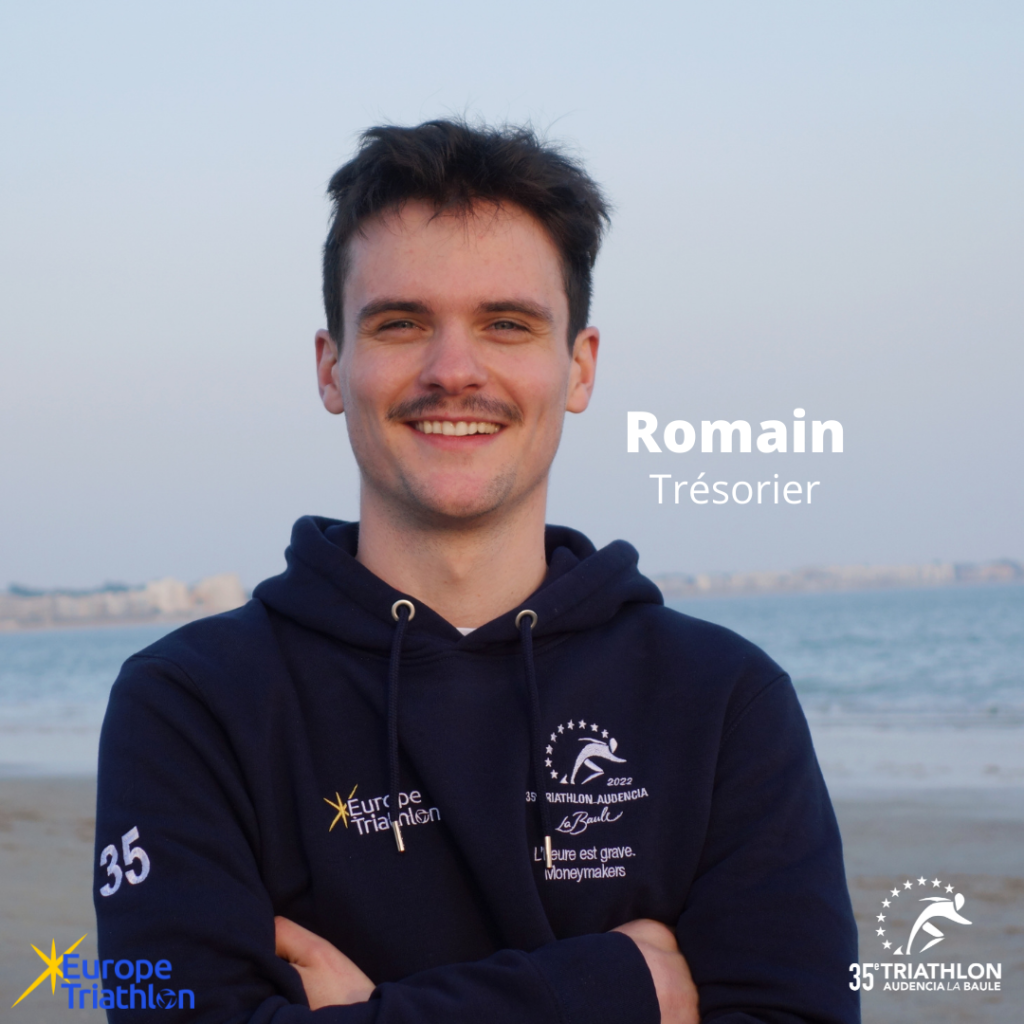 The treasurers take care of the finances of the Triathlon. They are responsible for monitoring the cash register, order forms and validating the invoices of all the association’s divisions throughout the year.

We do something really different during the Triathlon weekend: one of the members of the pole takes care of the VIP area and the VIP party organised in the evening, and the second organises the prize-giving ceremony in conjunction with the partner companies.

The communication department is responsible for communicating the event. Our main tasks are the management of press and TV relations in close relationship with Audencia’s communication managers through the drafting of press releases and the press kit.

Throughout the year, we manage the Triathlon’s social networks (Intsagram, Facebook, Twitter, LinkedIn, YouTube) as well as relations with certain service providers such as graphic designers, printers and posters. 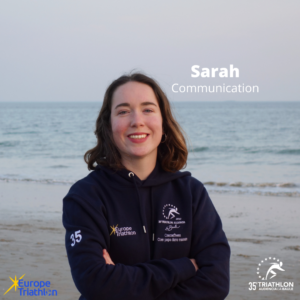 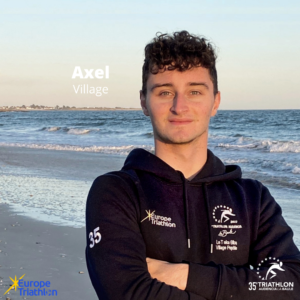 During the Triathlon weekend, the Partner Village is at the heart of the event ! Situated on the edge of the embankment, the Village tents overlook the beach. They are made available to corporate sponsors and welcome their sports staff, who come to run the Saturday morning during the Companies and Partners Tri-Relay, or the Sprint and Olympic Triathlon.

Athletes and their families can take advantage of the privileged areas to meet, exchange ideas, eat or watch the races live on television, all with a breathtaking view of one of the most beautiful bays in Europe.

Our role is the management of the Triathlon transition area. Beforehand, we draw up the plans of the area with the numbering and placement of the shelves as well as the different modifications to be made between races through the construction of a precise schedule. We also proceed with the labelling of the shelves corresponding to the bib numbers of the teams and individual athletes.

Finally, we produce a banding plan for the Central Area.

During the Triathlon weekend, we lead a team of 60 volunteers. We set up the park on Friday and tidy it up after the weekend. 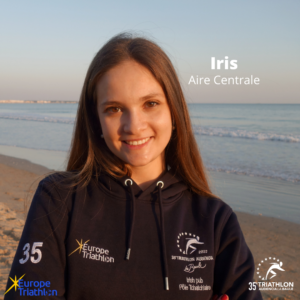 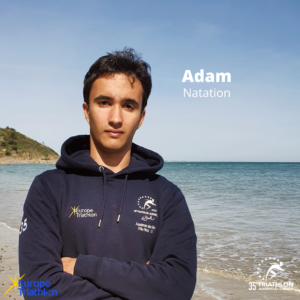 I manage the swimming part, meaning the installation of the course, the relationship with external contributors (SNSM, CKPCA) as well as the safety of the athletes and spectators on the beach.

During the Triathlon weekend, I have to organise the starts and make sure the courses are completed with the help of a team of 27 volunteers.

Responsible for the safety of the cycle route, we are in contact with external organisations such as the Town Hall of La Baule, the municipal and national police and referees.

We draw up the timetables of the 117 volunteers and student referents and supervise them during the weekend of the event. We supervise the marking out and security of the entire course. 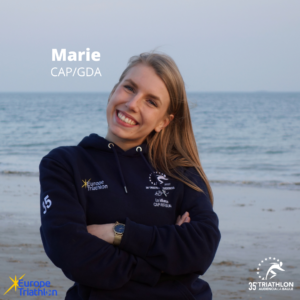 I have several roles as I manage both the running course and the finish area.

For the running course, first of all it has to be approved by the French Triathlon Federation (FFTri), especially for the Triathlon Grand Prix races.

I am in permanent contact with the timing company Ipitos for the chips of the athletes and their results as well as with the referees.

The supply division ensures the organisation of provisions along the races during the weekend. Upstream, this involves maintaining relations with partner companies, but also with other divisions within the association, notably the catering, the central area and transport.

Then the D-day, it is necessary to set up the different provisions points along the course and make sure that they run smoothly. To do this, I manage a team of 40 dynamic and smiling volunteers who help me throughout the weekend and who give voice to encourage our participants ! We work throughout the year on different tasks: we carry out the inventory of the Triathlon’s stocks by managing the different needs and supplies of material for each pole, we take care of the management of the partner signage and, finally, we carry out the preparation of the loading and transport of the material to La Baule.

During the week-end, a large part of our missions cannot be planned in advance. Indeed, the logistic division is in charge of managing the unforeseen events that could occur during the Triathlon as well as helping the other division that need reinforcements during the races!

My division consists of managing travel during the event, in particular the Europcar fleet of vehicles. I am in charge of transporting the volunteers by train to La Baule.

This is a central division at the weekend: the 400 volunteers as well as partners have to be transported in a fleet of 15 vehicles. 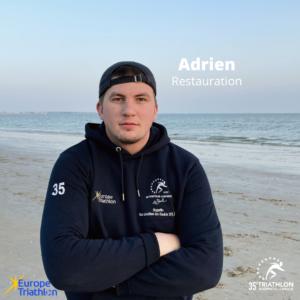 Together with the suppliers, we determine prices and services, place orders and plan deliveries. I also determine the menus served in the Partner Village.

During the weekend, the work is more intense because it is necessary to make sure that the accommodation conforms to the reservations, that it is well distributed, and that it is returned the next day. This involves organising everything concerning the Student Challenge during the weekend, meaning the race, the animation of the challenge tent, the meal and the evening.

Beforehand, there is a big communication work from the design (posters, flyers…) to the diffusion (Facebook, Instagram). This communication should not only be done through networks but also through canvassing possible sponsors and partners.

The event can also be promoted through presentations to students in various schools in France. There is also a real mission of innovation, as it is a division that must be reinvented each year to gain greater visibility.

On the one hand, the sustainable development division seeks to reduce the Triathlon’s environmental impact as much as possible on the day of the event, but also throughout the year by working with the other divisions to reduce waste and improve waste management.

The aim is also to communicate the Triathlon’s eco-responsible commitments, as demonstrated by the Comité National Olympique et Sportif Français (CNOSF) “développement durable, le sport s’engage®” label for the 11th consecutive year, and to raise public awareness of environmental protection in general.

Missions relating to disabled sports consist of supporting disabled and adapted sport athletes in Triathlon, from registration to assisting them during the races: launching, helping with transitions, securing the race environment.  The manager of this centre is also responsible for finding a disabled athlete to sponsor the event.